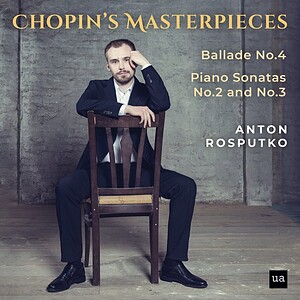 The album features three of Chopin's greatest solo piano works - his Ballade No. 4, and Sonatas No. 2 and No. 3.

Anton describes his thoughts behind the album:

‘If somebody asked me about the main challenge during recording and playing Chopin’s 4th Ballade and the 2nd and 3rd Piano Sonatas, my answer without hesitation would be: to offer something new in this music, so long been an inseparable part of the culture of classical music lovers for generations, while staying sincere and far from artificial decisions foreign to my genuine view of the works.

These pieces are a seduction for a pianist, a desirable professional and artistic challenge that cannot be resisted, even if there are already hundreds if not thousands recordings of the same music. We all know that there are dozens of piano compositions that have received so many performances that often we want to restrain ourselves from listening to them. The 2nd and the 3rd Chopin’s Piano Sonatas appear frequently in recitals (the 2nd especially, not to mention outside-of-concert performances of the 3rd movement, the Funeral March), and the 4th Ballade is the most played of the Ballades. However for me the beauty and possibilities of these works are never exhausted, whether listening or playing them. I have been contemplating the reason: a possible answer lies in Chopin’s raw emotions – as raw and true as can be, and the absence of “concert stage effects” – emotions which already evoke so much trust in a listener. This is especially relevant for the 4th Ballade. The introversion of this music remains shocking despite its open outbursts of emotion that culminate in the desperate coda.

Chopin composed several works that were meant to provide a charming and brilliant cherry on the top of his concert programmes, with virtuosity proclaimed openly by the use of term ‘Brilliante’ in their titles. In the works recorded here however, virtuosity is truly nothing but the server of a function – a speed necessary for a certain expression, as in the apocalyptic kaleidoscope of the 4th Ballade’s coda, or the whirling runs in 2nd Sonata’s ‘Presto’. The 3rd Sonata’s Finale is close to Chopin’s concert rondos, but far from their intent to please the audience merely with entertainment, and equally far from declaring self-satisfaction, even in its joyfully glowing B Major conclusion.

These works are true masterpieces, on which I have tried to work with sustained artistic attention and respect towards the music itself, and I am delighted to present my personal rendition of them to you.’