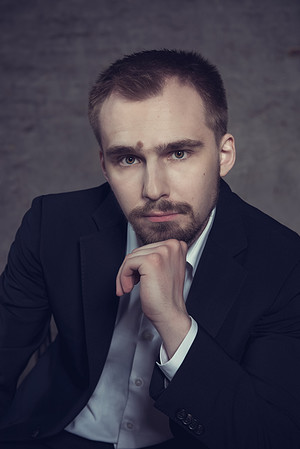 "He is an extraordinarily gifted young pianist and a very interesting musician"
"I respect his vision of music, which is very honest and deep"
Pavel Gililov, professor, prizewinner of International F.Chopin Piano Competition

From 1998 he studied at the Jūrmala Music School where his teachers were Tatyana Pavliuchenko and Jānis Maļeckis. From 2010 to 2017 Anton Rosputko studied at the Mozarteum University of Salzburg (Austria) in the class of Professor Pavel Gililov and finished his Bachelor and Master studies with distinction. He has taken classes at the International Piano Academy “Incontri col maestro” in Imola (Italy) in the class of Professor Boris Petrushansky.

Anton Rosputko received prizes from the Latvian Ministry of Culture in 2005, 2006 and 2008, as well as the Latvian Award “Recognition” in 2009. In 2012 he received the Hübel Foundation Scholarship. He is a prize-winner of the Mozarteum International Summer Academy (Salzburg, Austria, 2009), including performing in the Salzburg Festival. Anton has also taken part in masterclasses with Armen Babakhanian, Arkadiy Sevidov, Sergej Maltsev, Anatol Ugorski, Peter Tacács, Jacques Rouvier, Matti Raekallio, Siegfried Mauser, Wolfgang Manz and Denis Proshayev.

In 2020, a mini-album (LP) with his rendition of Chopin's Sonata No. 3 in B minor Op.58 was digitally released on the British label Ulysses Arts. It prefaces a full-duration album with Chopin's music to be released soon in the 2020/2021 season. The mini-album was featured in the 50 tracks selected by Spotify's classical music editorial team for the weekly playlist "Classical New Releases".